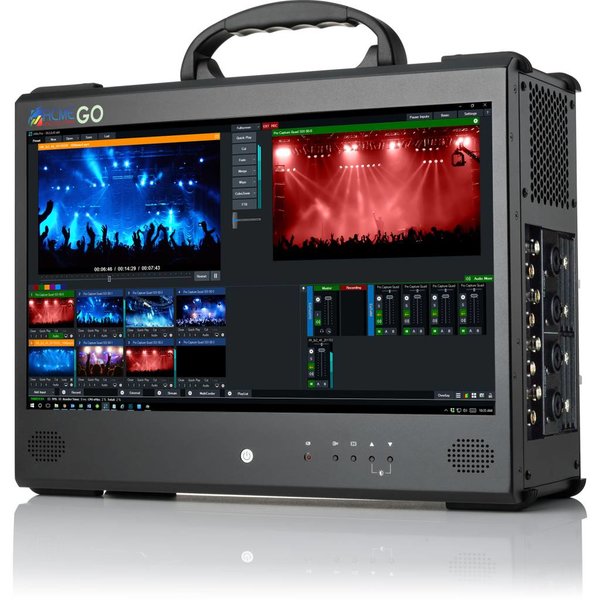 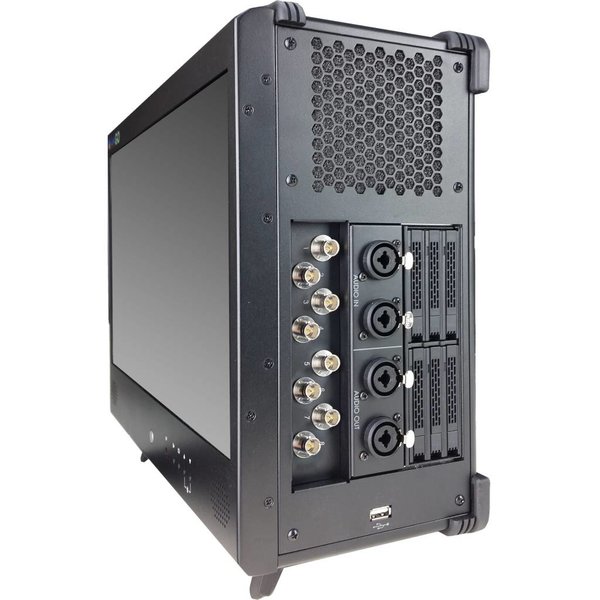 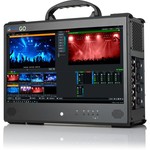 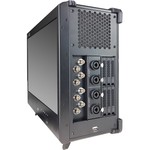 Acme Video Solutions GO Plus Portable Live Production Solution is a complete portable live production studio with built-in 17.3" LCD. Mix HD video sources including mixed resolutions and framerates, along with embedded and separate analog audio. Stream output live to the Web in RTMP, WMA, Flash, and other widely supported formats. Recording high-quality program feeds is easy, while the included removable SSDs media storage drives let you record up to eight ISO (isolated) channels from the SDI inputs, giving a producer the ability to re-edit later on.

The Windows-based switcher requires compatible, separately available, streaming and mixing software (either vMix, Wirecast, or LiveStudio). It comes equipped with an 8-port AJA HD-SDI I/O device plus there is a two-in / two-out XLR/TRS audio interface. Driving the software is an Intel Core i7 CPU along with an NVIDIA GTX 2080 8GB graphics card, 32GB of RAM, and a 500GB SSD drive. A redundant 500GB "failover" drive is provided in case of system failure. In addition to the built-in display, users can connect additional high-resolution displays via HDMI and DisplayPort outputs. This provides a multiview function, program monitoring, and easy access to other Windows applications. The workstation includes a keyboard, mouse, replay shuttle controller, and Wi-Fi dongle. For portability, the system comes with a padded, wheeled transit case to conveniently store and transport.

A built-in display allows for a compact, portable rig on-site with the ability to add one or two additional LCD displays via DVI, HDMI, or DisplayPort for Multiviewer and other application access.

Acme Video Solutions GO Plus is equipped with eight HD-SDI inputs (up to two of which can be used as outputs instead) via an AJA capture card, allowing up to eight live sources. You can also group four inputs together to provide two 4K inputs. When using the card in 4K mode, standard 1080/720 resolutions are unavailable. With up to two SDI outputs, producers can send multiple high-resolution feeds. For example, a "dirty" version complete with overlays for broadcast, and a "clean" version for recording and reuse later. Alternatively, one output can be dedicated to connect a broadcast-grade preview monitor to supplement the GO's built-in screen.

No heavy platter-based drives here; the GO Plus gives you four removable SSD storage slots enabling ISO recording of all inputs when fully populated—SSD drives are available separately. When you are finished, simply unplug the drives and easily move your footage to another machine for post-production or archiving.

For storing prerecorded video clips, audio, graphics elements, and more, the GO Plus features two 1TB SSDs. These can also be used for ISO recording from the SDI inputs.

Also included is a 512GB "failover" SSD. This is for emergency use during a live production should the primary drive or Windows installation fail. To use this drive, one of the SSD slots will need to be occupied.

A pair of balanced XLR/TRS combo jack inputs allow the switcher to bring in additional audio from professional sources, on top of up to 16 channels of embedded SDI audio. These inputs are accompanied by two XLR outputs for local monitoring. There is also an unbalanced 3.5mm audio input, and you can add external USB audio interfaces to increase the total number and type of available inputs.

In addition to the Ethernet port also found on the 4/4 and 4/4K models, the Plus features a USB Wi-Fi adapter for added flexibility.