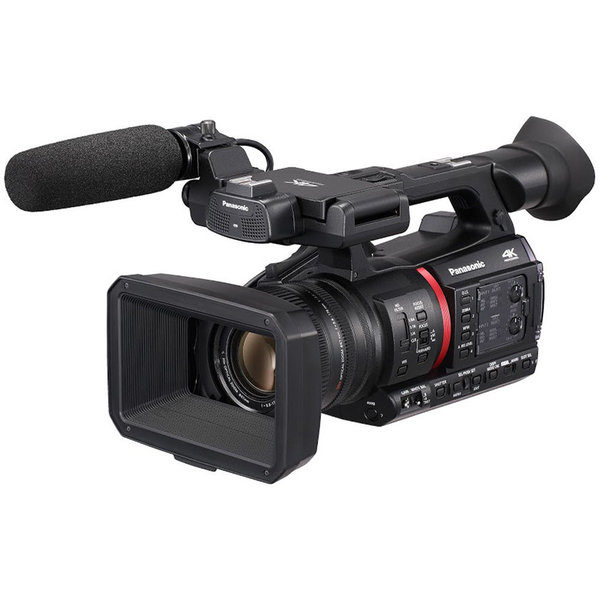 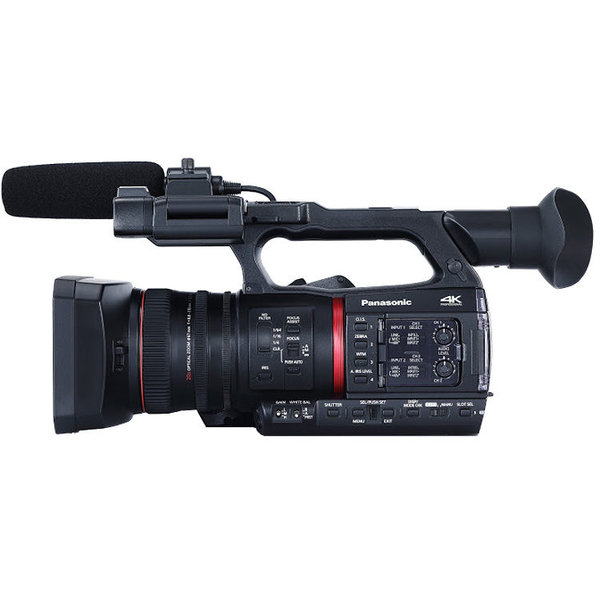 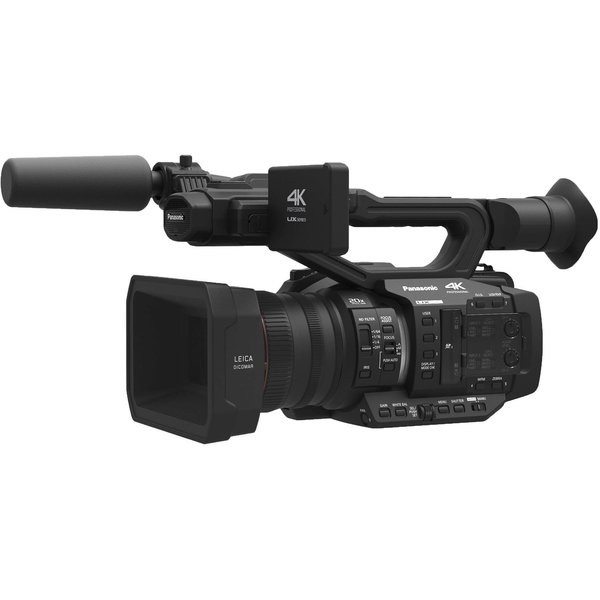 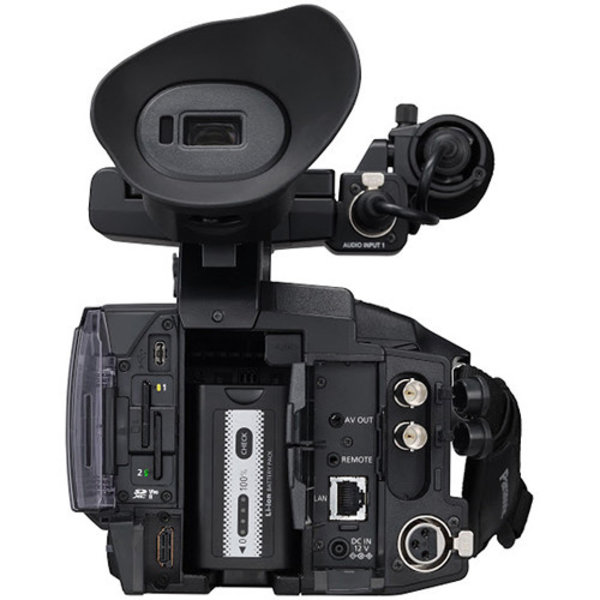 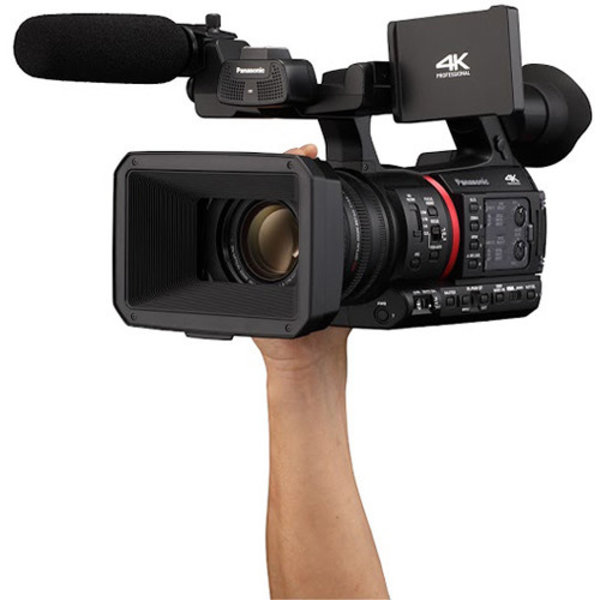 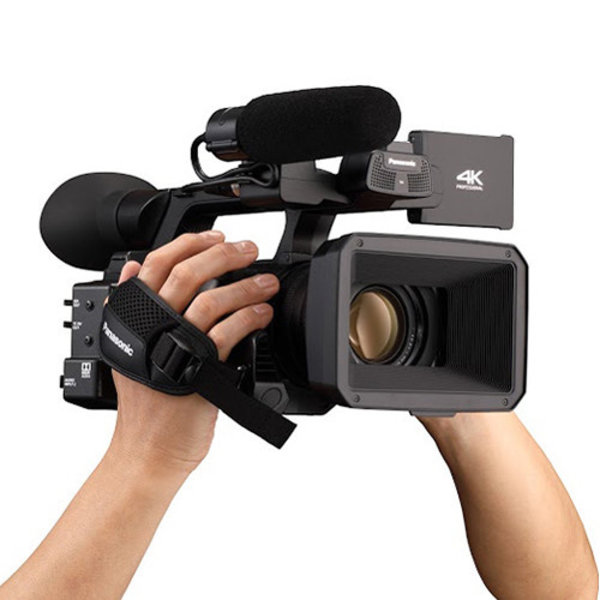 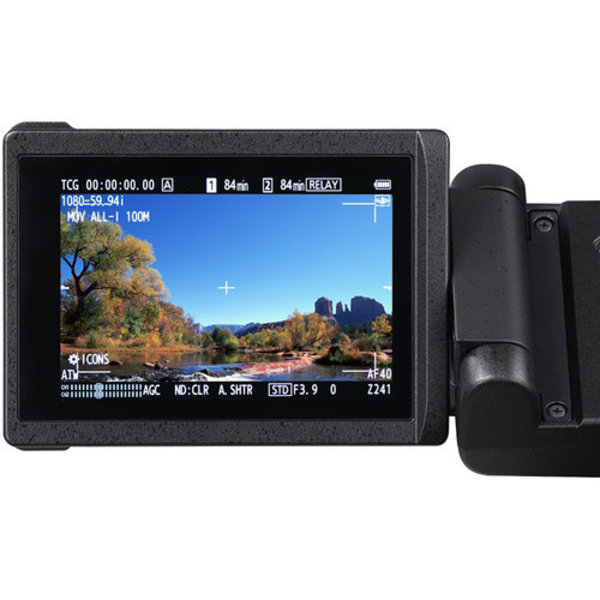 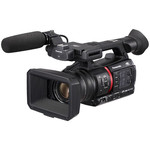 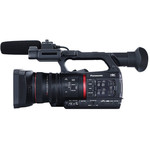 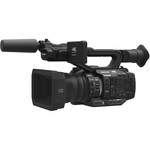 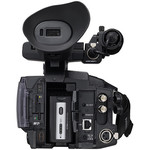 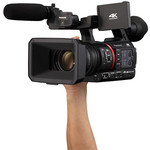 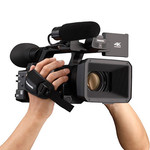 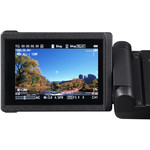 The Panasonic AG-CX350 4K Camcorder is designed for what Panasonic is calling the fusion of communication and broadcasting. A compact professional UHD 4K camcorder packed with features that you would expect to find in a full-sized camcorder. The AG-CX350 features a 1" MOS sensor recording in UHD resolution (3840 x 2160), in the MOV format using a variety of data rates including 400 Mb/s, as well as in HEVC at up to 200 Mb/s. The camcorder can also record HD in MOV, as well as HD/SD in AVCHD format for legacy productions. You can choose from eight different gamma settings including HLG, which provides an HDR output in the camera. It also features variable frame rate capability from 1 to 60 fps in UHD and 1 to 120 fps in HD. Recording is to dual SD card slots, which provides for simultaneous, relay, and background recording.

Integrated into the camera is a 20x optical zoom lens with 32x intelligent zoom. The lens features 5-axis image stabilization and three discrete lens control rings, one each for focus, iris, and zoom. The camera features an OLED EVF and a 3.2" LCD touchscreen monitor, and it has a built-in stereo microphone and two XLR audio connectors. Other connectors include both 3G-SDI and HDMI out (HDMI supports UHD), timecode in/out as well as USB 3.0, USB 2.0, and an Ethernet port for connecting to a network or wired streaming. An optional USB wireless adapter allows you to stream wirelessly.

Dual-System Camera
You can select from 59.94 or 50 Hz as the signal system for the camera. This is useful as it allows you to shoot in different countries with minimal concerns over flickering lights.

Eight user-selectable gamma modes?HD, SD, Filmlike 1, Filmlike 2, Filmlike 3, Film-Rec, Video-Rec, and HLG for HDR recording.
You can choose to output HDR over the 3G-SDI or HDMI output either individually or simultaneously.
Provides a 16-axis color control of your image with three skin-tone control so you can isolate and adjust your colors precisely and protect your skin tones.

Lens
The 20x optical zoom lens has a 35mm focal length equivalent to 24.5 to 490mm. 24.5 is an extremely wide angle for a UHD camcorder. It features 5-Axis Hybrid Image Stabilization in both 4K and HD, which can be useful when hand-holding the camcorder. The lens also features individual lens control rings for zoom, focus, and iris. This enables manual control of your lens (in addition to servo), similar to the control you get on full-sized shoulder-mounted cameras.

Additional features of the lens include:

Intelligent autofocus with subject tracking.
Custom AF function: The autofocus speed can be set in 7 steps, the sensitivity can be set in 10 steps, and the AF selection area can be adjusted.
The lens is controllable from third-party wired devices and also from iOS and Android tablets.

Recording Media
The AG-CX350 features SD card slots, providing you with a wide choice of media to choose from, all sold separately.

If you already have P2 cards, the camcorder is compatible with them with a caveat. The CX350 can record onto a microP2 card as an SD card, but please be aware that:

Dual Slots
The dual SD media slots permit you to choose from the following recording schemes:


Networking
The camera features an Ethernet port that allows you to connect it directly to a LAN (bypassing the need for a computer) and transfer your files to an FTP server with a global IP address. You can also use this port for wired streaming.

Enhanced Network Connectivity
The CX350 has preinstalled support of NDI, which provides:

Live Streaming
High-image quality FHD streaming without a PC or an encoder unit. During streaming, UHD/FHD video can be recorded to SD cards in the camera body.

Wireless Control from Smartphone/Tablet
The CX ROP app for iOS/Android allows the following:


Simultaneous SDI and HDMI Out
The CX350 supports simultaneous output of HDMI and SDI, with HDMI up to UHD and SDI to FHD video, both at 4:2:2 10-bit