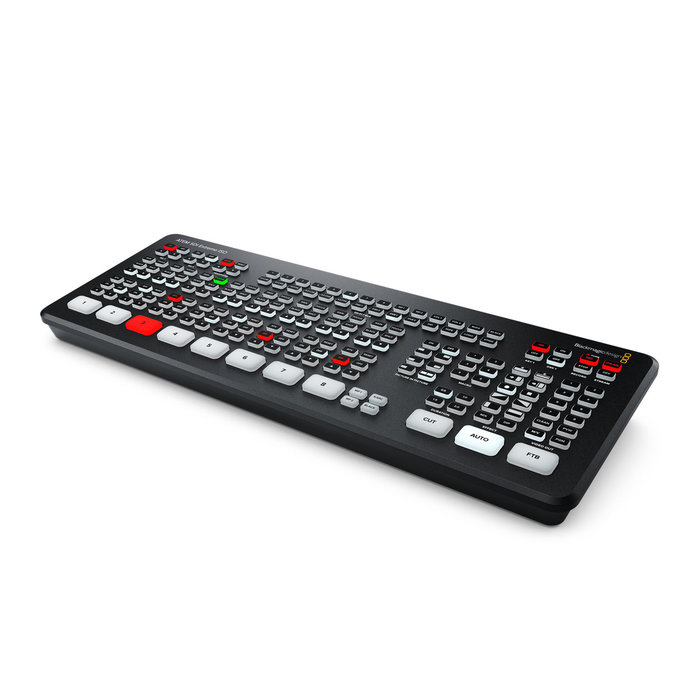 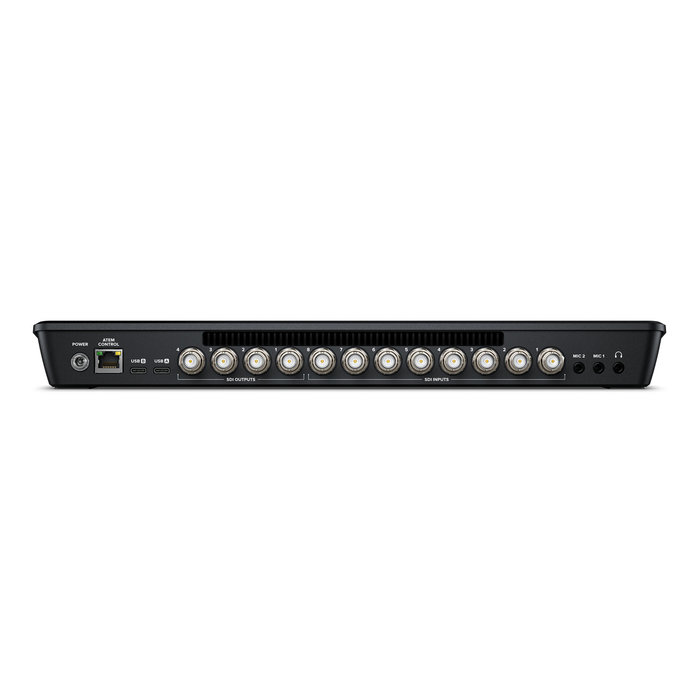 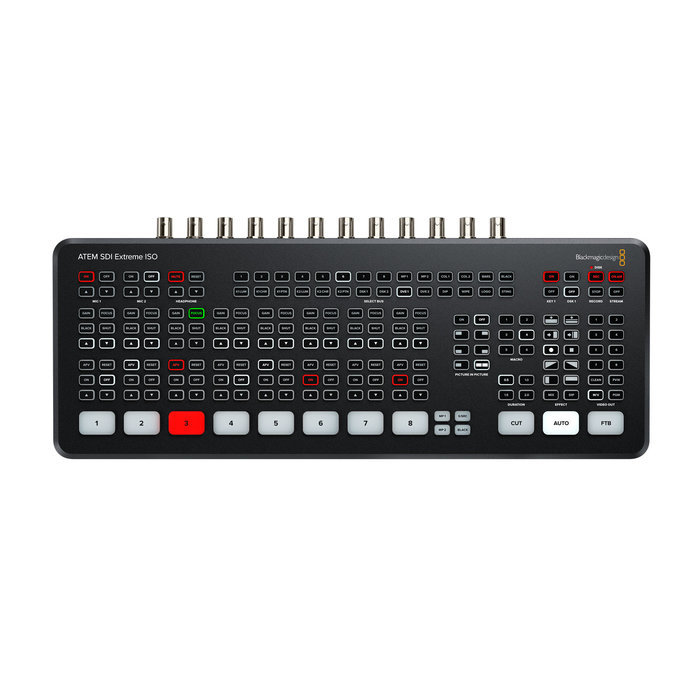 The Blackmagic ATEM SDI Extreme ISO Switcher is an 8-input live production switcher for live streaming. It features an integrated control panel and has advanced broadcast functions. In addition to live streaming using RTMP protocols, you can also run your program as if it were a webcam via USB. The switcher's ISO addition means you can record each of the eight input videos individually as an MP4, as well as the program output through one of the USB Type-C ports. The switcher automatically generates a DaVinci Resolve project file so you can make changes afterwards. This versatile switcher's eight independent 3G-SDI inputs accept all popular HD signals up to 1080p60. Each input has frame rate and format converters and supports resynchronization for seamless switching between a variety of professional and consumer cameras, game consoles and computer feeds.

Add effects, adjust colors and switch in real time using the buttons on the control panel or via the software control panel. CCU functions are available for controlling Blackmagic Studio and URSA Mini/Broadcast/Micro Studio cameras from the switcher. The Blackmagic ATEM Mini Extreme ISO supports up to nine layers, with four upstream and two downstream keyers, up to four chroma keyers, up to four linear keyers, two DVE with borders and drop shadow, five pattern generators, and two color generators. Designed for live streaming or as a webcam input to a computer. The Mini Extreme ISO has four 3G-SDI outputs for monitoring and supports a 16-way multiviewer.

The front panel includes easy-to-use buttons for source selection, video effects, and transitions. The source buttons are large, so you can operate them by feel. On the Blackmagic ATEM SDI Extreme ISO are buttons for mixing, recording and streaming audio, as well as output selection buttons that allow you to change the video output between camera inputs, program and multiview. On the rear panel are 3G-SDI connections for cameras or computers, additional microphone inputs, USB for webcam output, plus 4 x 3G-SDI "AUX" outputs for program video.

You can use the Ethernet output for connecting to your network and live streaming, or use the USB Type-C output as a webcam input for virtually any video software such as Zoom, Microsoft Teams, Skype, Open Broadcaster, XSplit Broadcaster and others. .

The Blackmagic ATEM SDI Extreme ISO supports tethering via an Apple or Android phone to use cellular data. It's also a great backup for the Ethernet connection, so your stream won't drop if your wired connection is interrupted. The switcher automatically switches to using the phone as the primary connection and the USB port also powers your phone so it doesn't drain the battery.

You can configure the 3G-SDI outputs for multiview with 4, 7, 10, 13, up to 16 views including program, preview, eight 3G-SDI inputs, SuperSource, clean feed, media player, streaming status, recording status and audio meter.

The Blackmagic ATEM SDI Extreme ISO can store up to 20 images with Fill and Key and supports PNG, TGA, BMP, GIF, JPEG and TIFF file formats.

The Blackmagic ATEM SDI Extreme ISO supports direct recording of your live broadcast to USB flash drives using the same H.264 video codec with AAC audio that you stream with. With the Blackmagic ATEM SDI Extreme ISO you can also record the eight video inputs separately (ISO) as MP4 files. This allows you to upload the video material directly to any online video site, such as YouTube or Vimeo. Multi-disk recording is also supported via a USB hub or the Blackmagic MultiDock, so when one disc fills up, recording can continue to a second disc for non-stop recording. Recording settings and disc selection are set in ATEM Software Control and there is a recording status display in the built-in multiview. You can even trigger recordings on connected Blackmagic Pocket Cinema cameras.

The Mini Extreme ISO stores a DaVinci Resolve project file, allowing you to access your live production in Davinci Resolve with a single click. All images from cuts, dissolves and media pools are loaded, allowing you to edit your live production using the recorded camera footage. If you recorded in Blackmagic Raw on the Blackmagic cameras themselves, you can link these files and take advantage of DaVinci Resolve's color correction capabilities.

One of the advantages of Blackmagic ATEM SDI Extreme ISO is its professional capabilities thanks to the range of built-in video effects. The cut button provides an instant cut when switching between sources. The auto button allows transitions of video effects. The Blackmagic ATEM SDI Extreme ISO has buttons that allow you to set the duration of the video transitions from 0.5, 1, 1.5 and 2 seconds. You can also select the desired type of effect for a smooth transition between sources, the Mix transition, and an intermediate color transition, the Dip transition. Or use fun DVE effects when switching between sources.