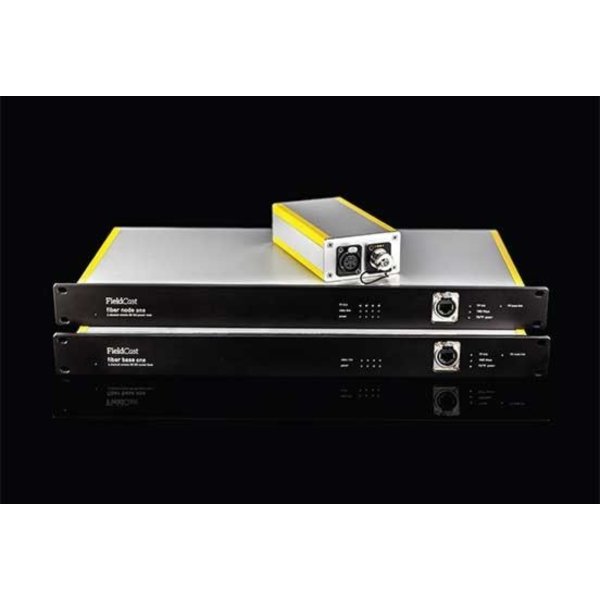 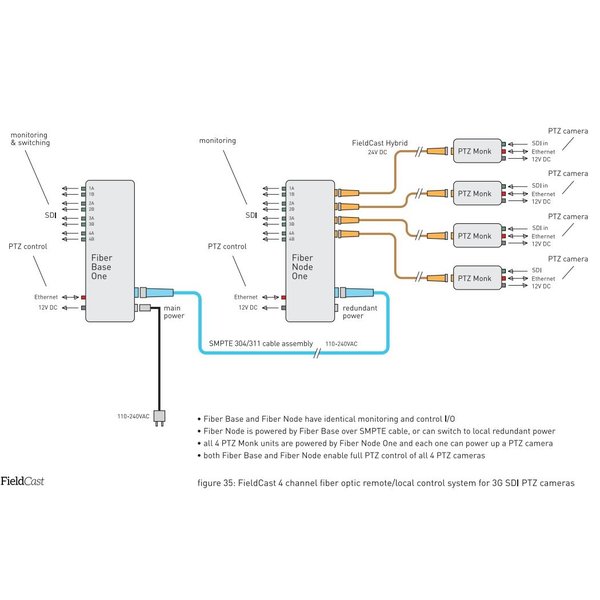 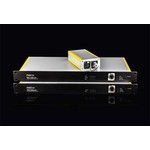 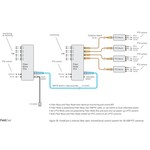 It provides you all the necessary fiber optic products to have your PTZ cameras controlled and monitored over fiber at different locations; a local strategic position in the field and a remote spot that can be further away from the venue, typically being an OB Van or control room.

The system is powerful and still mobile and flexible. It comes with one SMPTE cable and four lightweight fiber optic cables suitable for the world of small PTZ cameras.

FieldCast Fiber Base One is the unit that is the most far away from the PTZ camera. Typically, Fiber Base One will be placed in a control room or OB Van, in a 19-inch rack where it can connect to the switcher.

Fiber Base One is the unit that receives AC mains power from the power outlet and from there on basically delivers the power needed to power up converters, PTZ controllers and PTZ cameras, all along the way to the stage. It does so by transporting AC power over one SMPTE 311M/304 fiber optic cable to Fiber Node One, that in its turns does the AC/DC conversion for the rest of the equipment.

FieldCast Fiber Node One is in the middle of this turnkey solu8on, typically placed locally, at the venue, and mounted in a flight case that connects to a portable mul8viewer. Functioning as a central hub, it receives and sends signals from and to four PTZ cameras, using four FieldCast 2Core SM Hybrid Main Cables.

Fiber Node One brings you four channels of 3G SDI output so you can connect straight to your monitor or portable multiviewer. You can connect your PTZ controller directly to the Ethernet I/O port of Fiber Node One, and it will act as a standard Ethernet switch between your controller and your cameras, but now over fiber.

Furthermore, Fiber Node One features a four channel 24VDC power supply to power all four cameras over the FieldCast hybrid cable. And here it comes all together. For every channel, Fiber Node One connects to FieldCast hybrid cable, and this light and robust cable contains two strands of fiber for data transport and two copper conductors for power transmission. Just imagine, each camera only needs one flexible cable to transmit uncompressed SDI video, control data, and power!

Fiber Base One brings you four channels of 3G SDI output and Ethernet i/o, just like Fiber Dock One and Fiber Node One, and you can connect straight to the switcher, plug in one or more PTZ controllers, add a multiviewer, recorders, whatever you want. Communication with Fiber Node One is pretty straightforward.

One fiber of the SMPTE cable is used to tap into the fiber optic Ethernet switch of Fiber Node. This means that a PTZ controller connected to Fiber Base is part of the same network as a PTZ controller connected to Fiber Node, and both can control any PTZ camera in the network. The other fiber of the SMPTE cable forwards all four video signals that reached Fiber Node One to Fiber Base One, which means that the four SDI outputs of both Fiber Node One and Fiber Base One output exactly the same signals.

Fiber Node One has exactly the same functionality as FieldCast Fiber Dock One, and it has all the inputs and outputs. The front side contains 1 Ethernet i/o port to connect to a PTZ controller or Ethernet hub. You don't need to power the PTZ controller with its own power supply.

Over fiber, each connector receives uncompressed SDI video from a PTZ camera and carries Ethernet (camera control data) i/o. Over the copper conductors, each chassis connector delivers 24VDC power output to power up a FieldCast PTZ Monk and a PTZ camera. Just imagine, each camera only needs one flexible cable to transmit uncompressed SDI video, control data, and power!

The backside of Fiber Node One also houses 4 channels of 3G SDI out, with dual SDI output per channel, for locally monitoring the SDI video generated by the PTZ camera. So what's the difference with Fiber Dock One?

Fiber Node One comes with an SMPTE connector for standard SMPTE 311M/304 fiber optic cable and this extra connector adds a lot of functionality to the converter. SMPTE cable is a hybrid cable similar to FieldCast hybrid cable. It also has two strands of fiber and two copper conductors for power transmission, but it uses way larger connectors allowing for AC power to be transmibed over it.

Fiber Node One uses this feature to the max. If at the other end of the cable you connect a 100-240VAC power source, Fiber Node One will draw power from the cable and s8ll can do everything a Fiber Dock One does, but without the need for local power. This means that you can place the unit at any strategic position in the field, and the SMPTE cable simply acts as a long extension cord.

But Fiber Node one also uses the two fibers of the SMPTE cable! One fiber is used for extending the fiber op8c Ethernet network, and the other fiber carries all four video signals coming from the FieldCast PTZ Monk units. Here is where Fiber Base One comes in.

It connects to the remote end of the SMPTE cable, powers it, taps into the fiber optic Ethernet network, and receives the four video signals. It has Ethernet i/o and four 3G SDI output channels, just like Fiber Dock and Fiber Node, but it only has the SMPTE connector for fiber and power. Bottom line, Fiber Base One is designed to act as a remote unit for Fiber Node One and Fiber Node One acts as a local unit for Fiber Base One.

Features FieldCast 2Core Hybrid 100 meter of flexible fiber optic cable with two strands of fiber and two copper wires. The lightweight cable adds low voltage DC power to fiber and brings it into the field. Now you can power your converter, camera or other equipment over the cable. Features FieldCast PTZ Monk FieldCast PTZ Monk is a small one channel fiber op8c converter designed for 3G SDI PTZ camera systems with Ethernet control.

PTZ Monk converts the 3G SDI video output of the PTZ camera to fiber and acts as a fiber media converter for the Ethernet control data. When you connect a FieldCast hybrid cable coming from FieldCast Fiber Dock/Node One to the hybrid connector of PTZ Monk, it receives 24VDC at the input and converts it to a stable 12VDC at the XLR 4-pin output to feed the camera.

At the same time, the built-in media converter taps into the fiber optic Ethernet switch of Fiber Dock/Node One and the Ethernet i/o port on PTZ Monk becomes part of the network. And lastly, the 3G SDI input on PTZ Monk is converted to fiber, and the signal will find its way to Fiber Dock/Node One. PTZ Monk has separate standard connectors for power, SDI and ethernet, and patches easily to a PTZ camera.

1x FieldCast Fiber Base One