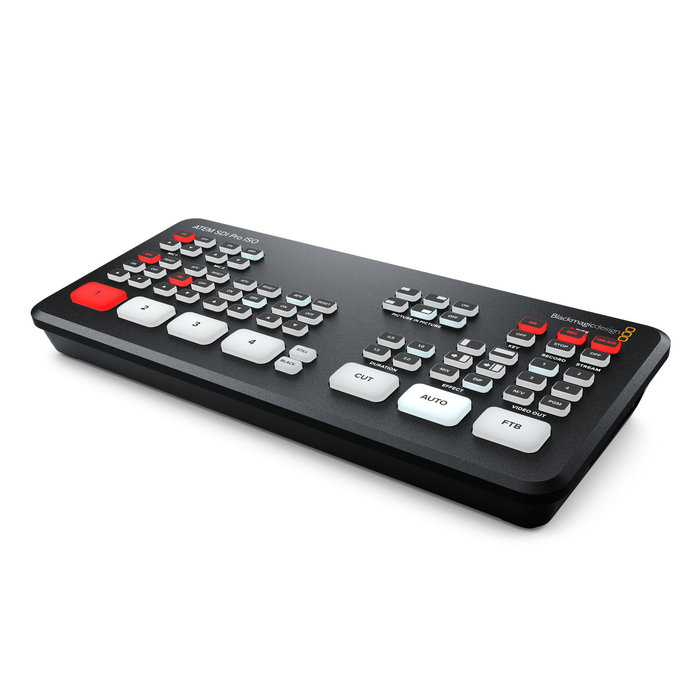 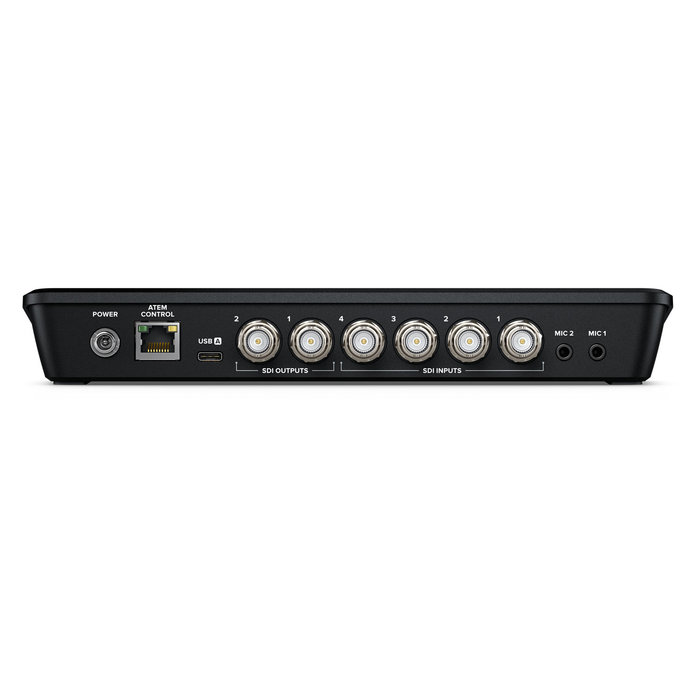 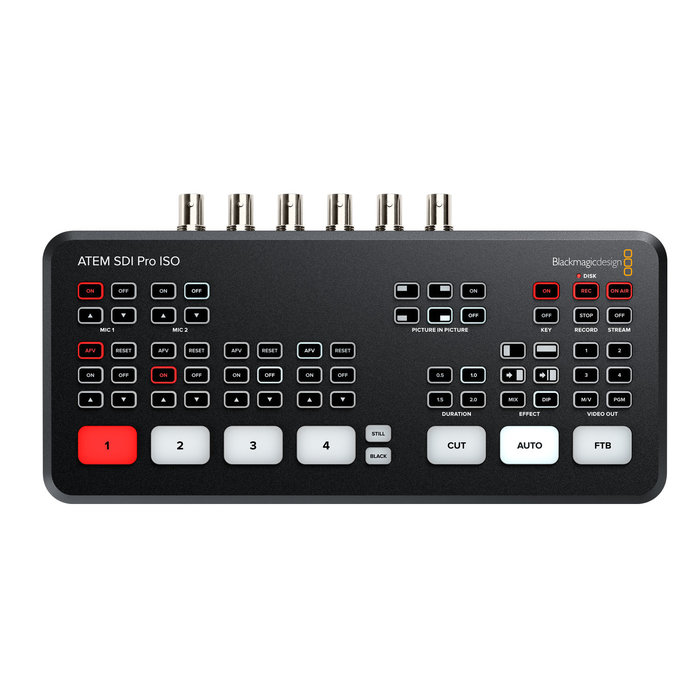 The Blackmagic ATEM SDI Pro ISO Switcher is a live production switcher with four 3G-SDI inputs and an integrated control panel designed for live streaming via USB-C via a computer or directly via the Ethernet output.
The Blackmagic ATEM SDI Pro ISO features a USB output that allows you to record the program output, as well as the individual (ISO) 3G-SDI inputs to an external USB drive (not included). In addition to recording the program stream and individual inputs, the Blackmagic ATEM SDI Pro ISO also records the embedded audio and analog audio inputs. A DaVinci Resolve project file of your live stream will also be generated. This allows you to open your live production in DaVinci Resolve to make adjustments afterwards using the source material already on your USB drive.

The ATEM Software Control Panel is used for control and configuration and allows you to control the data rate, audio meters, as well as the configuration and status of your live feed. And you can use the panel to stream to an (optional) Blackmagic Design Streaming Bridge that you can set up anywhere in the world, as long as it's connected to the internet.

By connecting a USB drive to the USB port on the Blackmagic ATEM SDI Pro ISO, the program stream and up to four isolated (ISO) recordings from the video inputs with embedded audio, analog input audio, graphics, and a DaVinci Resolve project file of your program output will be saved.

Hardware encoder, so no additional streaming software is needed

Automatic timecode sync for all cameras

Cut: When you press the Cut button, the Blackmagic ATEM SDI immediately switches from your current Program source to the Preview source. Cuts can be performed by selecting sources directly or by pressing the Cut button to move to the next source.

Mix: The Mix, or Dissolve, gradually transitions from one source to another by making a soft transition. You can set a custom duration to blend the transition manually.

Dip: Similar to mix transitions, a dip transition is a smooth blend that contains a solid color, image, or other clip between the two video sources. Dips to black or white between sources are most commonly used. You can also use logos or sponsor images.

Wipe: Built-in swipe patterns include circles, diamonds, squares, and more. Shapes and patterns can be inverted or softened and can even have custom colored edges.

DVE: With the powerful built-in Digital Video Effects processor, or DVE, you can push, rotate, pinch or swoosh your live video from one camera to another with incredible built-in transitions. DVE transitions can be flipped and reversed, giving you even more transition options.

Layer live video over other video sources or images with the Upstream Keyer. You can use the luma-key, linear key, pattern key or take a green screen as background and use chroma-key to place the foreground video directly over virtual sets.

Luma-key: Luma-keys work best with high-contrast images, such as white elements on a black background, so you can use the contrast to cut out the black background and replace it with live video or images.

Linear Key: Get great results with linear keying by using two separate sources for the Fill and Key to create a single video image. The Fill signal contains the video to be overlaid on the background, while the Key signal contains a grayscale mask to crop or mask the area to be filled.

Chromakey: Chromakeys are used every day for the weather forecast on TV and are a powerful way to combine live images in real time. The presenter usually faces a green or blue background, and the chroma keyer removes only that color and combines it with another image, such as a video or image.

Pattern Key: Combine live images with one of the built-in Wipe patterns to give live images or images geometric shapes. You have full control over softness, symmetry, size and position to create unique picture-in-picture effects that can be transferred as easily as any live source.

The ATEM SDI switcher includes one downstream keyer, so you can add images such as logos, bugs and titles from the built-in media player. Downstream keyers work from top to bottom, so they cover all the video switched to the program output.

The built-in audio mixer allows you to accurately adjust the levels and balance of both cameras and external audio on all six embedded audio inputs and the two audio input channels. The mixer features selectable On/Off/Audio-Follow-Video per channel, plus separate gain control per channel, level and peak measurement, and new Fairlight audio enhancements such as compressor, gate, limiter, six-band parametric EQ and master gain control.

You don't need an external media player for graphics files. The Blackmagic ATEM SDI allows you to store up to 20 broadcast quality RGBA graphics files in the media pool. The media player is available as an input source for your switcher. You can display images as full-frame video, or send them to the keyers as an overlay for your video. Popular image formats such as PNG, TGA, BMP, GIF, JPEG and TIFF are supported.